A guide to Royal Ascot Style

But whereas in the eighteenth and nineteenth centuries they were most likely to be foreign royalty and international statesmen, in modern times you are equally likely to see some of the biggest names in Hollywood, dressed and styled by some of the leading names in couture fashion.

In 1922 the Times correspondent wrote that “Ascot is notoriously the best place in England to see beautiful women in beautiful clothes,” and as a stunning Sophia Loren so elegantly demonstrated in this exquisite and classic white ensemble, things have remained unchanged ever since. 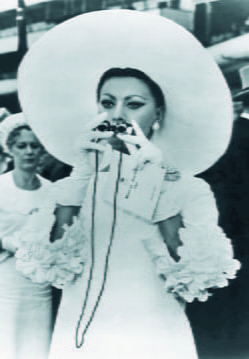 A reflection of British Society

Today all kinds of people rub shoulders at Ascot – royalty, aristocracy and stars of sport and entertainment from home and abroad mingle with ordinary men and women from different backgrounds. But at times during Ascot’s 300-year history, reflecting the standards of society at the time, some public areas did not permit the mixing of the sexes, or of different social classes.

When the new Iron Stand opened in 1859 it was completely barred to women; divorced men could enter but were barred from the Royal Enclosure. The fashionable London clubs, such as Whites, and the “smarter” regiments provided refreshment tents, but entry was naturally by invitation only.

In the 1850s and 1860s more trains were needed for guests and staff travelling to the increasing number of house parties hosted by the great and good during Royal Ascot week. But soon the well-to-do started choosing to travel apart from the crowds in their own carriages, which also acted as private grandstands once they reached the course. In this picture from the 1920s, the lucky few in their private carriage are even further set apart from those below them in the crowd by their very different attire. 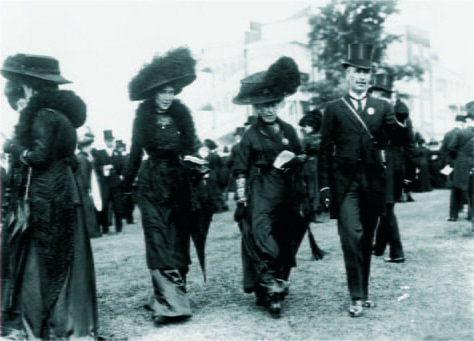 The essence of style for 300 years

Ascot has seen its fair share of era-defining, trend setting fashion moments. In the 1860s, poor Consuela, Duchess of Marlborough found Ascot week “very tiring… fortunes were yearly spent on dresses selected as appropriate to a graduated scale of elegance which reached its climax on Thursday; for fashion decreed that one should reserve one’s most sumptuous toilette for the Gold Cup day”. And it wasn’t just the ladies who gave careful consideration to their racing turnout. In 1922, when upmarket department store Selfridges opened its new menswear department, advertising focused on what the fashionable gentleman should wear to Royal Ascot.

But possibly Ascot’s most famous fashion moment took place at the movies. Following the death of the country’s beloved King Edward VII in May 1910, Royal Ascot became for the second time in a decade, “Black Ascot”. The Daily Mirror described the striking monochrome scene: “The occupants of the Royal Enclosure were in black… save for where ladies wore white flowers or had strings of pearls as the only ornament”. It obviously made a lasting impression on a young Cecil Beaton, who 54 years later would recreate this panorama of black and white costumes to showcase his leading lady and one of cinema and fashion’s most enduring icons, Audrey Hepburn. The “Ascot Gavotte” scene in My Fair Lady (1964) remains to this day one of the most instantly recognisable and frequently imitated tableaux in the history of the movies. 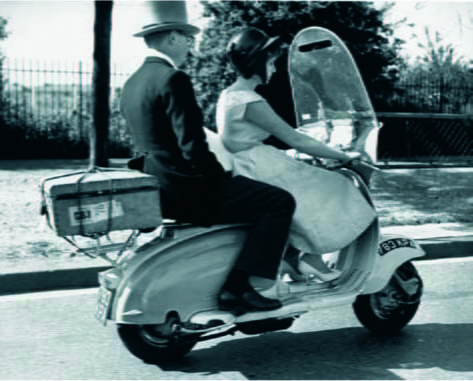 Getting to the races was half the adventure
Travel to Ascot Racecourse was once a serious undertaking. Today Ascot, 30 miles from London, is an exhilarating day trip to some of the world’s best racing. However 18th century racegoers stayed at Ascot for all four days of the festival, mostly to stay in an enormous encampment near the course. The rich travelled by carriage, whilst the poorer classes walked. The sheer number of spectators was incredible even to contemporary observers. In sunny summers the lines of carriages on the rails were on average five and in some places ten carriages deep, stretching for nearly a mile.
Taking the racing line

A seemingly never-ending line of  racegoers snakes towards the racecourse from Ascot railway station in the 1930s. Since the 1830s when the railways opened up the race meeting to the masses, the journey by train to Ascot has been an important and exciting start to the eager racegoer’s day.

In 1873 the Times wrote “Never has the South Western Railway brought down such a heavy and fashionably filled train as that which dispersed its contents over an Ascot radius of some half dozen miles or more, while the afternoon trains on the Great Western have filled the Royal Borough with bustle and excitement.” 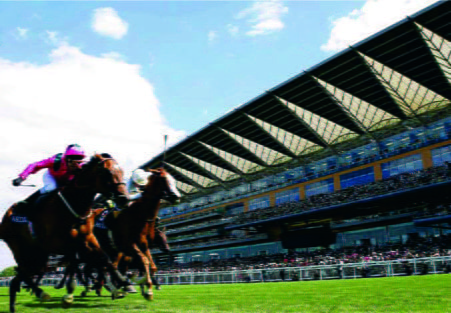 See and be seen

The popularity of Ascot soon meant that racegoers demanded the best facilities that they could afford. Three centuries ago, just as today, the most highly sought after stands have not only been those with the best view, but the places where the most fashionable people in society have gone to be seen. For those not invited to the more exclusive stands and boxes, the grandstands have provided the best view of the action. The original 18th and early 19th century stands were temporary structures, but through time their successors have become larger and more sophisticated buildings including all the comforts that racegoers demand.

In 1961, the Queen Elizabeth II Grandstand opened at a cost of £1 million, containing 280 private “dining rooms.” Ascot has genuine claims to having pioneered private corporate hospitality boxes within what was a ground-breaking structure at the time. The Grandstand that you see today (pictured) was a more expensive building to construct at 220 times the cost of its predecessor.
No more eating on the hoof

There are picnics, and then there are Ascot picnics. Eating and drinking has for three centuries played an important part in the enjoyment of a day at Ascot. In 1912 the motor-car was first allowed into the racecourse and shortly afterwards the tradition of the picnic in the car park started.

Number One and Two Car Parks are still generally where the most formal and elaborate picnics take place, with berths in these coveted spots being passed down from generation to generation in some families. 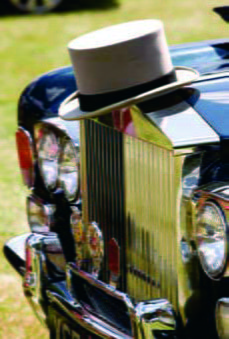 Want to go to the Races? Buy tickets now!
https://www.eclipsemagazine.co.uk/buy-racing-tickets/

WIN a LOVE Bracelet worth £89 from Les Georgettes!
February is the month of romance and what nation is more renowned for romance than the French?
https://www.eclipsemagazine.co.uk/win-a-love-bracelet-from-les-georgettes/