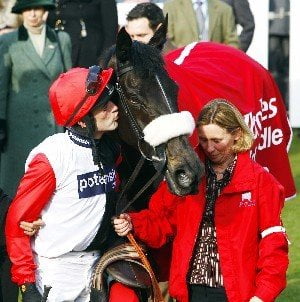 This year’s renewal of the Ladbrokes World Hurdle was billed as the most competitive that Big Buck's had run in given that he was up against several opponents unexposed at 3 miles including Oscar Whisky and Thousand Stars.

However, the end result was much the same as the previous three runs as Big Buck's was challenged up the hill but stayed on well as usual to win by 1 ¾ lengths to the only mare in the race, Voler La Vedette. He did have to work harder for his win this year and Ruby Walsh was pushing away between the final two hurdles with the result of breaking his two pre-race threats in the shape of Ocsar Whisky and Thousand Stars.

Voler La Vedette appeared to be full of running approaching the last flight but for some reason her jockey Andrew Lynch switched her towards the stands' rail. She was ridden after the last but could not get to Big Buck's.

Big Buck's has never been the most straightforward of horses to train. He is a manic box-walker and gets upset if he is not the first horse to be fed in the morning and today he veered away from the favoured stands’ rail after the second last and then came back towards it after the last.

Ruby Walsh was unmoved when he said afterwards: “I was happy enough when he started to run off the rail after the second last because I was thinking it’s going to take a fair one to get past him. He stuck his head down and went for home. He’s never flat out and always has a bit left. I was confident enough that he would outstay the others. If ever I squeeze a bit more he gives more, but I don’t know how much is there because I’ve never got to the bottom of him.”

After winning his fourth Ladbrokes World Hurdle and in the process equalling the record winning streak of 16 over jumps, set between 1951 and 1953, his trainer Paul Nicholls said: “For me winning today means more than anything, this was our number one target and the one I wanted this week because he is so special.

"It was a great ride and when Big Buck's was pricking his little ears going to the last I know that we were in business because he just keeps galloping. It was nearly a career best effort today.

"He’s awesome and to have 16 wins and four World Hurdles is pretty amazing. He’s just class, a fantastic horse.”

Owner Andy Stewart said: “I watched the race with Jeremy Kyle and he told me how much he’d like Big Buck's to go on his show in America but he has a bit of a problem even travelling to Wincanton, let alone Liverpool or even Punchestown. He gets a bit moody so it’s highly unlikely, even though we love supporting Irish racing, that he would go to Punchestown.” 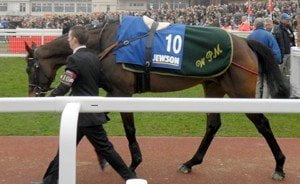 The day started well for the Irish with Sir Des Champs winning the Jewson Novices’ Chase. He was upsides with the winner at the last and quickened clear in the final150 yards to keep his unbeaten career record of seven wins from seven runs.

Trainer Willie Mullins made his intentions for Sir Des Champs very clear after the race when he said: “I said I didn’t mind which race he ran in this time as long as we come back next year on Friday for the Gold Cup.

"We’ve travelled round the country with him to avoid the other Gigginstown runners and he’s come here rather under the radar. We elected to be up with the race today from the start and I could see he had a fair bit in the tank coming to the last.”

The Pertemps Final was won by Cape Tribulation giving his trainer Malcolm Jefferson his third Festival winner and his first success since Dato Star won the Weatherbys Champion Bumper in 1995.

“This means everything, it’s why we get up in the morning,” said Jefferson who is based at Malton in North Yorkshire. “We don’t have a lot of money to spend, you just have to hope you can get to the big meetings and crack it, but you need so much luck.

"Cape Tribulation won his first two novice hurdles and then the River Don and he was given a rating of 150 so was completely stuffed. We then sent him over fences and I don’t think he really liked them. He’s not gutless but just jumps hurdles much better than fences.

"I honestly thought that if everything went right today then he had a great chance today.”

Nicky Henderson notched up a staggering sixth victory at this year’s Cheltenham Festival in the Ryanair Chase. He was quick to pay tribute to the ride that his stable jockey Barry Geraghty had given to Riverside Theatre to win by just half a length from the battling Albertas Run who has won the previous two renewals.

“He never got into his rhythm and was never jumping but that was one of the greatest rides I’ve ever seen. And the horse is as tough as they get. He will try for you. He just probably needs a bit further. We’ll have to go up in trip.

"They are always going to go a good gallop in these races and it was just a bit out of his comfort zone. His jumping wasn’t standing up to the pace of the race.

"I was watching it with Jimmy [Nesbitt, owner] and we were all doom and gloom but you just can’t say enough about the ride Barry’s given him.”

The Byrne Group Plate went to the 9/2 favourite in convincing style as he made all going on to win by 6 lengths. It was trainer David Pipe’s first winner of the Festival. “Very happy but relieved as well,” said the trainer. “The horses have been running well enough all week without winning so it’s good to get off the mark.

This was only the second run for the French-bred Salut Flo since February 2010 when he chased home Prince de Beauchene at Haydock. “He’s had tendon trouble and we’ve had to be patient with him and it's paid off.

"We know Salut Flo was ready for his comeback when he ran here at Cheltenham in December and he was running a massive race when he made one blunder three out which put him out of it. But if he’d won that day he might have been handicapped out of winning today.” 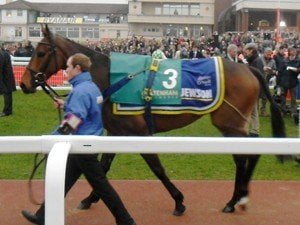 The final race of the day, The Fulke Walwyn Kim Muir Challenge Cup Handicap Steeple Chase went to Sunnyhillboy making it a poor day for the bookmakers as he was the fourth winning favourite on the trot. The victory for Sunnyhillboy also gave his trainer Jonjo O’Neil his second winner of The Festival this year.

“He’s a brilliant little horse and he loves this place. He has been unlucky a few times but he has been a brilliant horse for the yard, a real tough honest horse.

"If I had the choice I would have gone for the Pertemps Final but he didn’t get in so we were left with this race. We were very happy with him and everything went well for him.

"Alan [Berry, amateur jockey] gave him a fantastic ride and got him into a good rhythm. Alan is a great lad and everybody knows the work he put in with Don’t Push It.”

Berry added: “He just kept picking up and is an out-and-out stayer these days. He deserves this, he’s tough and genuine. When Butler’s Cabin won in 2007 he collapsed on the run in so this is the first time I’ve walked in to this crowd, It’s amazing.

"He could be a Grand National horse in time, he jumps and stays so well’”

At the end of Day 3 the Irish have just 3 winners on the board with the UK way out in front on 17.

"I live in the North of Cumbria near the Solway Coast. My wife and I own a smallholding where we keep our horses. I have been involved in racing for over 20 years – the highlight being when a 2yo I owned won first time out at Hamilton Park. I work full-time in the racing game spending my time writing, researching and on course as a paddock judge – you can learn more about a horse’s chances watching them in the pre-parade and parade rings than you might imagine."

Disclaimer: Please note that Tony offers tips but cannot guarantee the results. All gambling is at your own risk and neither Eclipse Magazine Ltd nor Tony Ward can be held liable for any money lost as a result of following the tips. By using tips from this page you are deemed to have accepted this disclaimer. Please read your bookmaker's gambling guidelines, terms and conditions when placing a bet.