Epsom Downs opened its doors for the first time in 2018 with the Investec Spring Meeting on Wednesday 25th April, when the highlight was the £50,000 Listed Investec Blue Riband Trial (2.45pm, 19 entries) for three-year-olds.

The trial for the Investec Derby, run over 10 furlongs, was promoted to Listed status this year and was given a new name.

This year’s renewal of the Investec Blue Riband Trial was run in memory of the late Anthony Cane, who died on 29th January 2018, aged 69, after battling motor neurone disease.

Cane was chairman of Epsom Downs Racecourse from 2008 until 2016, during which time he played a pivotal role in the completion and opening in 2009 by the Duchess of Cornwall of the Duchess’s Stand at the racecourse and the new hotel the following year.

He was involved with Investec becoming the long-term sponsor of the Derby Festival and subsequently the 10-year extension of the support, ensuring that the premier Classic, the Investec Derby, remained the richest race in Britain.

He presided over Her Majesty The Queen’s Diamond Jubilee celebrations which started at the Investec Derby Festival in 2012.

A chartered surveyor, Cane was Strutt & Parker’s senior partner before retiring. He was a member of The Jockey Club and also had success as a racehorse owner, with the James Fanshawe-trained Mohican Girl winning two Listed contests in the early 1990s.

The Investec Blue Riband Trial offers the winner a wildcard entry for Britain’s premier Classic and richest race, the £1.5 million G1 Investec Derby at Epsom Downs on Saturday 2nd June, provided he or she are not already entered or a gelding.

The 2017 Investec Derby Trial worked out extremely well, with the winner Cracksman ending the year as the highest-rated horse in Europe following his devastating victory in the G1 QIPCO Champion Stakes, and runner-up Permian taking G2 honours in the Dante Stakes and at Royal Ascot in the King Edward VII Stakes.

For the 2018 renewal Crackman’s trainer John Gosden, who had won the last three editions of the Investec Blue Riband Trial, had four promising colts among the 19 entries but narrowed his selection to one – Khalid Abdullah’s Crossed Baton, who got the better of highly-regarded rival Tigre Du Terre in a novice event at Kempton Park on 31st March.

Leopardstown maiden winner James Cook, who is a full-brother to top-class racemare Found, was one of two runners for Ireland’s champion Flat trainer Aidan O’Brien. Stablemate Zabriskie was also engaged.

Mark Johnston’s runner Dee Ex Bee had already gained a wildcard entry for the Investec Derby by winning the Totepool Conditions Race over an extended mile at Epsom Downs in September.

Newmarket trainer George Margarson saddled the progressive Technological, who does not have an entry in the Investec Derby. The son of Universal was the impressive six-length winner of a handicap over an extended mile at Wolverhampton on Tapeta in January before capturing a 12-furlong novice event on Polytrack at Lingfield Park on his latest start on 4th April.

Technological is owned by Abdulla Al Mansoori, who won the Investec Blue Riband Trial with Our Channel in 2014.

My Lord And Master trained by William Haggas,  was an impressive six-length winner at Nottingham in November.

As a gelding, the Ed Walker-trained Simpson would be unable to qualify for the Derby wild card if he won, and Miles Christianus trained by Robert J Osborne also ran.

Results below.
(Please click on small images to view enlarged version, then use side arrows to scroll through.) 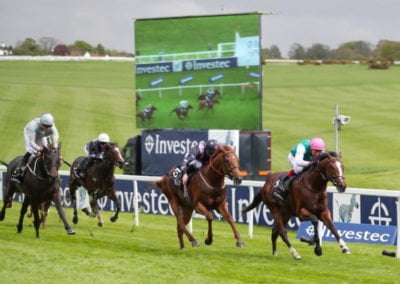 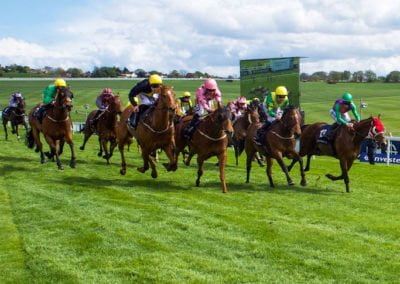 Photographs by Rachel Groom and Investec.

Newmarket trainer John Gosden and Frankie Dettori enjoyed four a row in the £50,000 Investec Blue Riband Trial when Crossed Baton made all to win the newly-promoted Listed mile and a quarter event at Epsom Downs.

If Crossed Baton, the 11/4 victor, proves anywhere near as good as Gosden’s 2017 winner Cracksman, then connections will be pleased. He would have gained a wildcard entry into the premier British Classic and Britain’s richest race, the £1.5-million G1 Investec Derby, run over a mile and half at Epsom Downs on 2nd June if not already entered.

Dettori did not intend to make all on the Khalid Abdullah-owned home-bred son of Dansili, having his fourth start, but ended up doing so when seeing off the persistent challenge of the runner-up My Lord And Master (William Haggas/Danny Tudhope, 5/1) by head in 2m 11.35s on going described as Good, Good to Soft in places.

The Mark Johnston-trained Dee Ex Bee, the well-backed 15/8 favourite who gained a wildcard entry for the Investec Derby by capturing a conditions race at Epsom Downs on 1st October, kept on to finish a further one and a quarter lengths behind in third of the eight runners.

Gosden, also successful in this race with Christophermarlowe (2015) and top-class filly So Mi Dar (2016), was delighted to register yet another success in the Derby trial – his sixth in all.

He said: “It wasn’t exactly the plan to make all, but Crossed Baton did everything right though.

“The plan was to actually get a lead, he jumped but no-one wanted to lead, so Frankie did his own thing. He said Crossed Baton handled everything well. The horse just got a little unbalanced in the last part of the race and just slightly changed legs.

“It is the camber here – he was getting used to that, but he did it well. The second horse’s [My Lord And Master] form is rock solid.”

No decision has been made yet about whether the Investec Derby is the target for Crossed Baton.

Gosden explained: “We’ll see how he comes out of this race – he handled the track pretty well and he has won. There is obviously, the Investec Derby to consider. It is a step at a time at this time of year, but it’s wonderful to win a nice Listed race here at Epsom.

“He is already in the Derby and that is a nice option. We’re thrilled with the horse and he’s shown the benefit of his recent win at Kempton. It’s lovely to win this race again.

“Crossed Baton would prefer good to firm ground. He is a big boy by Dansili who doesn’t have the biggest of feet and he just flows over faster ground.

“This ground was slow enough for him, but he handled it. If we have a hot summer, we might be back and I am thinking of giving a spin around the track again at the Breakfast With The Stars event (22nd May).

“Cracksman was not as strong as him at this stage, So Mi Dar was brilliant and they stacked up pretty high. Crossed Baton is a grand horse and I’m delighted with him. He got lonely in front over the last 50 yards and changed his legs.

“I would not think an extra two furlongs would be a problem – not on the pedigree. We will take it a day at time – see how he is over the next week and make all those decisions. We have done better this year – we only won it by a short-head last year!

Dettori reported: “I expected there to be more pace early on. I jumped to get in the box seat, but nobody took it off me. So I went my fractions and got a little bit lonely in front.

“When I had to really grab him at the end, he got a little bit unbalanced and gave the other horse another chance to have a go at me, but luckily for me the line was there.

“It was a nice performance without being sensational. We go home, try him again and see what happens. He has to step up, but hopefully this race will make him grow up and go forward.

“I don’t think it was a Derby winning performance today, but at least he got a feel of the track and he can only improve.

“A mile and a quarter to a mile and a half is his game. I think he is a horse who is still a work in progress – still learning, quite babyish but nice. We will see whether he is a Derby horse. Cracksman won this race last year and you never know.”

Lord Grimthorpe, racing manager to Khalid Abdullah, whose last victory in the Investec Blue Riband Trial came with the Charlie Hills-trained Slumber in 2011, commented: “I was very pleased with this horse.

“Crossed Baton has done it nicely and we have to think about whether he is the calibre for the Derby or whether we go a little more gently.

“That will be the main question, but he is a solid straightforward horse.”

WIN a LOVE Bracelet worth £89 from Les Georgettes!
February is the month of romance and what nation is more renowned for romance than the French?
https://www.eclipsemagazine.co.uk/win-a-love-bracelet-from-les-georgettes/

Want to go to the Races? Buy tickets now!
https://www.eclipsemagazine.co.uk/buy-racing-tickets/