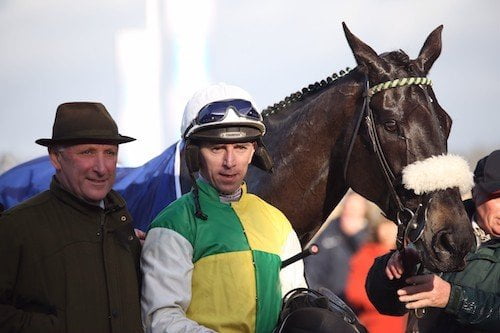 Trevor Hemmings, who became the first owner for over a century to win the Crabbie’s Grand National with three different horses, said: “It’s remarkable. Someone’s very fortunate or someone’s looking down on me. Winning the three is incredible although I do buy them with this race in mind.

“Mr (Noel) Le Mare did three wins with Red Rum but I’ve done it a different way by selecting a Hedgehunter, a Ballabriggs and a Many Clouds. I just hope I can carry on and find another. It was a long time ago when somebody won with this many different horses.”

Leighton Aspell also hit the headlines when he rode the winner for the second year in the row, the first jockey to do so since Brian Fletcher in 1974/73 on Red Rum, first jockey to win two years running on different horses since Bryan Marshall in 1954/53 (Royal Tan/Early Mist).

Trevor Hemmings continued: “The story of how I got him is that I went round the stables at Tattersalls Ireland (in November 2007) with Jerry O’Leary, a friend who looks after my horses over there. We liked him and picked him out. We sent David Minton to look and he said the horse had no pedigree. I said to look again as he was athletic and to bid for it. He did and we got him. He cost 6,000 euros – I’m into expensive horses, Albertas Run cost 20,000 euros! You can do a lot with a little if you’re patient.

“I said to Oliver that this horse had got his weight in the National and wasn’t going to get any better in another year so we should run if he was OK. The horse has another cylinder, he used it in his Hennessy and Betbright Chase (at Cheltenham) but not in the last mile of the Gold Cup. The horse can’t tell you what happened that day. There was a nice gap between the Gold Cup and National dates and provided he was well we said we’d take a chance and run.”

Trainer Oliver Sherwood added: “I still don’t know what happened in the Gold Cup. We were disappointed. He didn’t run his race and I won’t have it that we were put out of our comfort zone by the winner. I think he just got out of bed on the wrong side that day. I can’t answer what happened there and that was our concern coming here.

“I’ve done nothing with him since. He purposefully hasn’t seen a National fence, Leighton and I discussed it and decided that. He’s had one school and all he’s done is two quiet bits of work.

“It gave me a bit more confidence this week when Silviniaco Conti ran well and Holywell didn’t do badly, so the Gold Cup form was standing up. There was an extra week between Cheltenham and Aintree this year which made all the difference. He’d go over a cliff for you. He just had a wobble after the race, it’s not the first time he’d done it.

“I’ve never had a finisher in the race before and I’m really going to enjoy this one.“

“It is wonderful. Many Clouds has given his all and gave me some ride. I asked him some big questions and he has dug really deep.

“I tried to conserve energy because he had a hard race in the Gold Cup. It is a wonderful training performance by Oliver [Sherwood, trainer] to freshen him up and recharge the batteries.

“He is all heart and gave me the best ride I have ever had over these fences. He was awesome and I was just hoping the battery life would last. I took every opportunity to save as much battery power as possible.

“We thought we had him cherry-ripe for Cheltenham but he just disappointed us. I didn’t doubt his ability but I just thought he’d travel better there. He’d trained well and eaten well since, he’d given all the right signals, but you just had a nagging doubt at the back of the mind after Cheltenham. Until we got here today we didn’t know. We just had our fingers crossed.

“It all went well. I had a clear run. I had a good start, I got in behind with Alvarado on my left and AP (McCoy) on my outside on a good jumper. We knew he could jump so I wanted to be patient. I had a small squeeze at the Canal Turn and then after that I had a lovely smooth ride. Last year when I won I was shellshocked and had to work hard at various points in the race. I was going very well from the second-time at Becher’s and was always hopeful from then.

“I briefly spoke to AP afterwards and he was full of congratulations like he always has been. He’s as good a loser as he is a winner. If he’d have won he’d have brought the house down. I think the only people whose glad he’s beaten were me and (Sandown Racecourse’s) Andrew Cooper. It will be a wonderful send-off at Sandown.”

Many Clouds’ workrider Nathan Horrocks said: “I feel a bit of an idiot because I said to Oliver on Tuesday that I wasn’t very happy with the horse’s work. What a great performance – he jumped and travelled and looked as if he made it very easy for Leighton out there. It’s great for Oliver, the stable and Lambourn. If you were going to war you’d take this horse with you. He’d stand by you and be your right-hand man. He’s a great character who tries his heart out, as he did here and in the Hennessy.”

The winners also celebrated the second fastest time ever recorded for the race – 8m 56.80s. The record time is 8m 47.8s which was set in 1990 when Mr Frisk won.

‘CJ’ IS SO PROUD OF HIS GRAND NATIONAL WINNER

Aintree racegoers were able to take a final look at Crabbie’s Grand National winner Many Clouds when the Oliver Sherwood-trained superstar was paraded in front of the stands after the last race of the day.

He was led up by Chris Jerdin, who has looked after the horse since he arrived at Sherwood’s Lambourn yard.

“I’m very proud of him,” said Jerdin, better known as ‘CJ’. “He had a bit of a wobble after the race, just like he did after winning the Hennessy, but he’s fine now. He’s had a long season – not many horses win a Hennessy, run in a Gold Cup and win the National. He’s a star.”

Sherwood said: “I stopped CJ riding out at the start of the season, much to his annoyance, because he’s 60-something. He used to work for Fulke Walwyn and look after Rose Ravine. He’s a yard man now but he’s a proper, old-fashioned lad and he’s done Many Clouds since he arrived in the yard.”

Asked what it meant to his yard to win the Crabbie’s Grand National, Sherwood replied: “This is the horse of a lifetime. We’re a middle-sized yard with 50, 60 horses, so it means a hell of a lot to me, my family and the whole yard.

“Many Clouds is a gentle giant. He would go over a cliff for you.”

AP McCoy, fifth on Shutthefrontdoor, said: “I was very happy for a lot of the way. I was following up behind Many Clouds – who I know is a dour stayer – between the third and fourth last but going around the final bend I felt I was running on empty.

“I got a great ride off him and Jonjo had the horse in great shape. I wouldn’t mind riding him next year!

“I am going to miss riding horses like that in races like this. I really thought for a long way that he could win. It was my last Grand National and a very enjoyable one.

“I just want to say well done to Leighton Aspell, Oliver Sherwood and Trevor Hemmings. It is great for them.”

Paddy Brennan, rider of the second Saint Are, said: “I had a great time on Saint Are and it is fantastic to be part of a tremendous horserace. It is not nice to be second but I was second to a true gentleman in Leighton Aspell.”

Liam Treadwell, third on Monbeg Dude, said: “Monbeg Dude was brilliant for me today. I was a long way out of my ground but it is the way to ride the horse because he did not know he was in the race for three quarters of it.

“I thought I might win going to the elbow but his run has just petered out. I had a fantastic ride and roll on next year.”