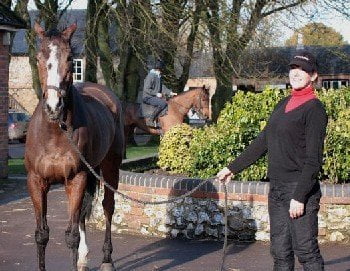 A talented professional jockey, 24-year-old Tarnya Davis reached Becher’s on the second circuit before pulling up 100/1 chance Numerate in the 1989 renewal. Numerate was bought 48 hours before the big race by Tarnya’s father, Peter, from trainer Oliver Sherwood.

She was a jockey for 10 years, partnering 47 winners under Rules, and married Sherwood in October, 1993. They have two children, Sabrina and Archie.

She recalls her National experience for Eclipse Magazine:

The stuff of dreams…

“It was my ambition ever since I can remember to ride in it. I love the National and I used to be able to name every winner and knew any trivia there was to know about the race. It still sends a chill down my spine as they race to the first fence.

“The horse I rode was bought for the National by a family friend, expressly for me to ride. I don’t know if I would have got a ride otherwise – but there are plenty of male jockeys who would never get the opportunity either, so it’s not just a female thing.

“I was lucky enough to ride a few winners in my time as a jockey so I had other high points, but this was something I had dreamed about since childhood – so yes it was the most exciting thing I ever did. The noise of the crowd as you jump off and all the way down to the first fence is like nothing else I have ever experienced.”

One of the boys…

“I was the only female riding that year, but that didn’t matter except I missed girly company getting changed. You get ready very early for the National anyway – so I spent more time in the men’s Weighing Room beforehand and to a man they were all great to me! I got a kiss and good luck hug from every single jockey before going out to ride and was in no way made to feel I should not be there. I had been riding under Rules for quite a few years at this stage so they all knew me anyway and they always treated me as an equal.

“They were fantastic: there is always ribbing so nothing more than usual… and I’m perfectly capable of returning it! I grew up with two brothers so spent my time playing football and sport of any sort, so I was well used to male environments, attitudes, and language!

“[And] Ginger [McCain] is a big softy: I’ve teased him many a time over women jockeys. He’s a bit like John McCririck – they are all hot air!!”

“If the horse is good enough there is no reason why not [a woman jockey will win the race any time soon]. But very few girls would get on anything with a realistic chance with the possible exception of Nina [Carberry].

“Yes [the race today is less demanding on horse and jockey than it was ten, twenty or thirty years ago]. The fences have been modified, plus riders have to have ridden a certain number of winners over fences, so it is safer, but I don’t think that is a bad thing. It’s still challenging as a race, and nobody wants to see the horses get hurt.”

“I didn’t feel any added pressure at all. They like to do a lot of pictures and stories about girls riding in the race so the week before was very busy, but great fun – and it’s all part of the attraction and the build-up to such a famous race.

“It is the most amazing race to have anything to do with. I love it, the buzz you experience from riding in it will live with me forever. Thankfully I jumped every fence at least once before pulling up at the 21st because it must be such a let-down if you fall at the first. Oliver [Sherwood, her husband] and I have walked the course several times with our children and they find it hard to believe that BOTH Mummy and Daddy have ridden in the race!”

As told to Sara Waterson