Might Bite proved his credentials for the Cheltenham Gold Cup with his triumph in the King George VI Chase at Kempton Park. His path to the crown in March has been eased by the news that Thistlecrack will miss the event due to injury, narrowing the talent pool to contend for the title.

The Irish horse has reeled off five wins on the bounce, highlighting his rise to the top. Nicky Henderson’s charge will now aim to knock off reigning champion Sizing John in the Gold Cup. The seven-year-old put forward one of the worst performances of his career over the festive period, finishing down in seventh in the Leopardstown Christmas Chase.

Sizing John has not shown signs of struggle before, therefore, for punters looking to back him for a second win on the bounce in the Gold Cup, it will be worth monitoring his form with tips at Timeform. The battle between the duo promises to be an intense affair, with the absence of Thistlecrack potentially leaving the prestigious race as a straight shootout.

Might Bite has been the horse to watch since the start of 2017. He has enjoyed a meteoric rise as he appeared to be failing to deliver on his potential. At the end of 2016, the bay gelding suffered a fall at the Kauto Star Novices’ Chase, losing out on the final fence at Kempton Park after being considered one of the leading contenders for the victory.

He bounced back with a triumph at the Novices’ Chase in Doncaster to kick off 2017 on the right note. The result sent Henderson’s charge into Cheltenham Festival with momentum and with Nico de Boinville in the saddle, he produced the performance of his career at the RSA Novices’ Chase. The bay gelding came through the field with a solid run down the stretch, although he did allow Whisper to close within a nose due to a mistake at the last fence.

The Irish horse edged out Whisper once again to end the 2016-17 season with his third-straight triumph. The eight-year-old was considered the leading contender for the race and he duly delivered the victory by dominating down the stretch to edge out his rival by two lengths. Henderson ensured that his charge started the new National Hunt campaign at the same level of form, producing a dominant display at the Future Stars Intermediate Chase to win by eight lengths at Sandown Park.

Might Bite proved his quality by defeating an extremely talented field, including Whisper and Thistlecrack to win the King George VI Chase. The Irish horse was rarely troubled at Kempton Park and, with De Boinville in the saddle, he gradually shifted through the gears before cantering down the stretch to win by one length.

The next stage in his development will be to prove his quality at one of the biggest races in the world, although Sizing John and his team will not be relinquishing the crown lightly. However, Jessica Harrington’s charge put forward one of the worst displays of his career, finishing in seventh at the Leopardstown Christmas Chase despite being considered the favourite for the event. 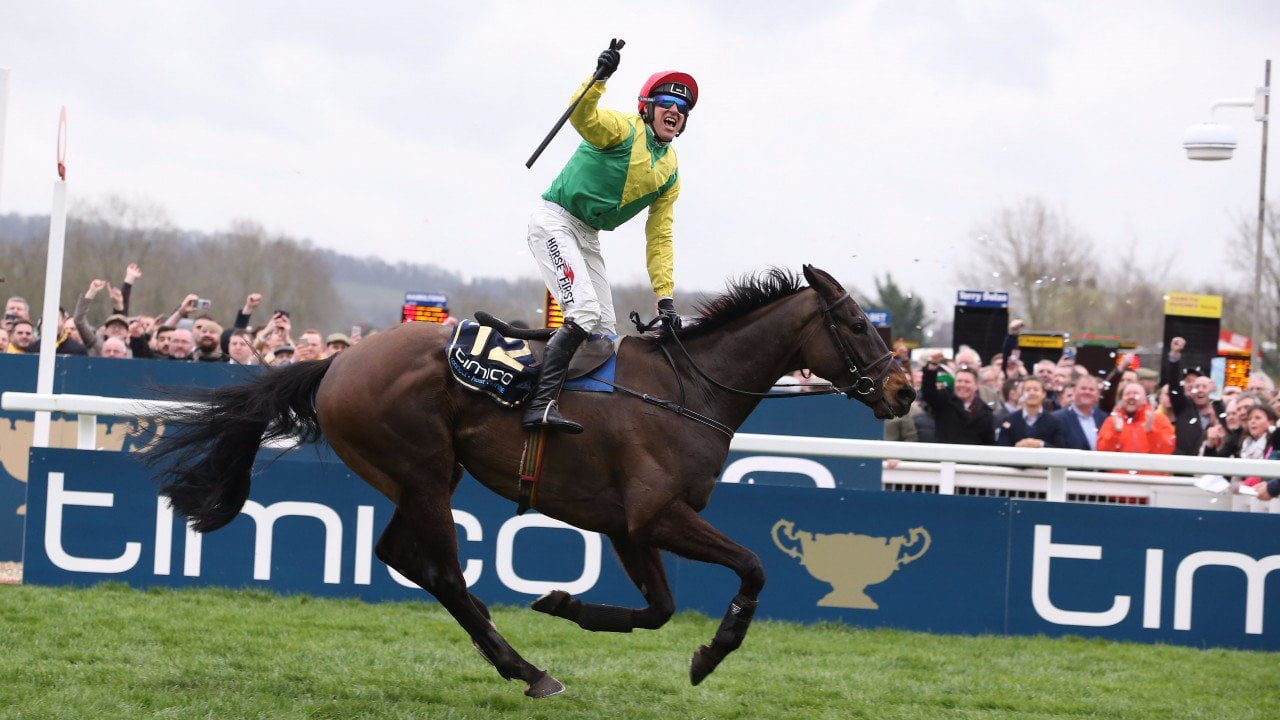 There are similarities between the rise of Might Bite and Sizing John. Last season, he made his charge to win the Gold Cup following a good start to the year. He continued to look dominant even after his success at Cheltenham. The bay gelding defeated his great rival Djakadam to claim the Punchestown Gold Cup, winning the event by a short head.

Despite Sizing John’s success, Djakadam was considered the favourite for their first duel of the 2017/18 season in the John Durkan Memorial Punchestown Chase. Although Harrington’s charge made an early mistake, he was able to recover and come through the field to win by seven lengths, leaving Djakadam trailing.

The seven-year-old lacked rhythm at Leopardstown, failing to recover from another mistake. Harrington and her team will be hard at work to prepare the reigning champion for a defence – which will see the horse join elite company to win back-to-back titles. Might Bite’s challenge appears to be significant, although the absence of Thistlecrack will make life easier on the bay gelding as he prepares for a run at history.

#WIN a Flower Pendant Necklace worth £95 from Jana Reinhardt!
To celebrate #MothersDay (22nd March 2020) Eclipse Magazine has teamed up with #artist and #goldsmith Jana Reinhardt.
https://www.eclipsemagazine.co.uk/win-a-flower-pendant-necklace-from-jana-reinhardt/

Leading trainers for The Festival at Cheltenham 2019
https://www.eclipsemagazine.co.uk/the-festival-2019-leading-trainers/