A History of Ascot

There are few sporting venues that can match the rich heritage and history of Ascot Racecourse. Over the past 303 years, Royal Ascot has established itself as a national institution and the centrepiece of the British social calendar, as well as being the ultimate stage for the best racehorses in the world. 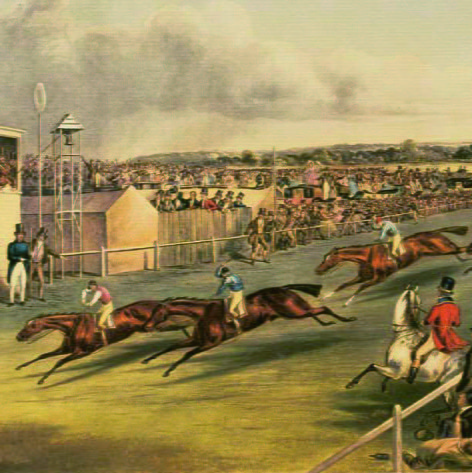 The presence and patronage of successive generations of royalty have defined so many of the unique traditions that we associate with Ascot today. In fact, without royalty, there would be no Ascot Racecourse.

It was Queen Anne who first saw the potential for a racecourse at Ascot three centuries ago and since then the racecourse has been inextricably linked with the British Royal Family. The Royal Ascot meeting traditionally held in June remains the only “Royal” race meeting in the country. It is famous for its Royal Procession in state up the course, as well as the Royal Enclosure and the party atmosphere of Gold Cup day.
The first race meeting ever held at Ascot took place on Saturday 11th August 1711. The inaugural event was Her Majesty’s Plate, worth 100 guineas and open to any horse over the age of six. This race was almost unrecognisable as the fast flat racing we see at modern Ascot. Each of the seven runners had to carry a weight of 12st and all were English Hunters, very different to the sleek thoroughbreds that race today. The race consisted of three separate four-mile heats, so the winner would have been a horse with tremendous stamina. Sadly, we have no record of the winner of that first race. Today the Queen Anne Stakes is still run in memory of Queen Anne’s foundation of the course three centuries ago.
The precise origin of the Royal Meeting is unclear – it was an event that evolved over time, but we do know that the first four-day meeting took place in 1768. Royal Ascot week as we now know it really started to take shape with the introduction of the Gold Cup in 1807. In fact, Royal Ascot was the only race meeting held at Ascot until 1939.

Since the very first race meeting three centuries ago, the presence of royalty and their guests and attendants meant that Ascot attracted the highest ranking and most fashionable in society, who came to see and be seen, as well as enjoy the sporting pursuit of horseracing. Naturally the fashion to attend Ascot filtered down through the social strata, until by the turn of the century Ascot week had become an established part of all fashionable society’s summer season.
The stylish “great and good” of the time were guaranteed to spend at least a week in the vicinity of the racecourse – not just watching the racing, but also enjoying the extravagant parties and hospitality laid on for their pleasure. In fact this tradition continued into the early twentieth century, with grand house parties, breakfasts and balls the norm throughout Royal Ascot week, until the First World War and the relative austerity of subsequent decades saw the time for such lavish excess come to an end.
But much still remains at modern Royal Ascot and at the racecourse that can be traced directly back to early race meetings here. It was around the time of the first running of the Gold Cup in 1807 that the roots of today’s traditional Royal Enclosure dress code emerged. Beau Brummell, a close friend of the Prince Regent, decreed that men of elegance should wear waisted black coats and white cravats with pantaloons. Over the years, this evolved into the wearing of morning suits and equally formal clothes for ladies, who must wear hats in the Royal Enclosure.

Although a Royal Stand dates back to the 1790s, the Royal Enclosure as we know it today was born in 1822 when King George IV commissioned a two storey stand to be built with a surrounding lawn. Access was by Royal invitation only. Three years later in 1825, King George IV also began the annual tradition of the Royal Procession. The King, leading four other coaches with members of the Royal party, drove up the centre of the racecourse in front of the delighted crowds and this has continued to the present day, remaining one of the defining and iconic images of Royal Ascot and of the summer season.
The legacy of King George IV, who adored racing and particularly attending Ascot week, is still very strong at Ascot today. One of the most obvious legacies that he left to racing is the racing colours that he used as Prince Regent, still worn today by the jockeys riding Her Majesty The Queen’s horses. The unmistakable combination of purple body with gold braid, scarlet sleeves and black velvet cap with gold fringe was also used by King Edward VII.

The Gold Cup still remains the feature race of the third day of Royal Ascot. It is colloquially known as “Ladies’ Day” as, in the formative years, it was the dominant day in terms of the racing, attracting the largest crowds and, we can assume from the adoption of the term “Ladies’ Day,” more ladies!
The term seems to have been first used in 1823 when an anonymous poet described the Thursday of the Royal meeting as “‘Ladies’ Day’…when the women, like angels, look sweetly divine.” In the nineteenth century it was common for a small fortune to be spent annually by the most fashionable and elegant society ladies on dresses commissioned solely for Royal Ascot, with their most beautiful and striking outfits saved for parading on the day of the Gold Cup.
It is, however, the public not the racecourse who call it “Ladies’ Day” and although almost every racecourse markets a “Ladies’ Day,” the great charm of the original is that it has evolved rather than been created.
The Gold Cup is Ascot’s oldest surviving race and today’s winning owners still receive a gold trophy which becomes their property. Trophies to be retained by the owner, are only awarded for three races at the Royal Meeting, the other two being the Queen’s Vase, inaugurated in 1838 to commemorate Queen Victoria’s accession, and the Royal Hunt Cup, first run in 1843. A member of the Royal Family traditionally presents all three of these prizes. For all the other 27 races, perpetual trophies, many of which are antiques, are awarded and returned to Ascot to be presented each year.

The tradition of the Royal Ascot picnic is one which can be traced back to the very earliest race meetings at the course. In the eighteenth and early nineteenth centuries there are accounts of wealthy racegoers turning up with entire carriages devoted to Champagne, wine and cigars and even portable ice-houses to transport them in! In the early nineteenth century refreshment tents started to be provided by London’s gentlemen’s clubs and the “smart” London regiments, where invited guests could escape the crowds for cool Champagne and buffets. Ascot catering was always extravagant for those who could afford it and the tradition of the one-hour lunch taken between the first and second races continued up until the Second World War.
With the arrival of the motor-car at Ascot in 1912 came the more modern tradition of the picnic in the car park. Even today you can catch sight of butlers, candelabra and silver service at some of the more lavish picnics, especially in Number One and Two Car Parks. In 2006 a Country Life survey found that Royal Ascot is the South of England’s most popular picnic spot and the most popular sporting occasion at which to picnic in the country. In fact it is quite common for berths in Number One Car Park to be passed down informally from generation to generation.

The way in which Ascot has been run remained almost unchanged until very recent times, and in itself demonstrated the fundamental link between the racecourse and the monarchy. Administration of Ascot has always been handled on behalf of the Crown by a representative appointed by the Monarch, by the Master of the Royal Buckhounds from 1711 up until 1901, until Lord Churchill was appointed as His Majesty’s first Representative. Then in 1913, the Ascot Authority was established by an Act of Parliament. His Majesty’s Representative became Senior Trustee (of three) of the Authority with the Clerk of the Course acting as Secretary.
Today, as Ascot Authority (Holdings) Limited, Ascot retains these positions, but with the additional appointment of non-executive directors, a Chief Executive and departmental directors. Until 2002 Ascot Racecourse was a private trust, with no accounts published. In January of that year, as part of the preparation for the redevelopment of the racecourse, Ascot incorporated.
Ascot Racecourse closed for twenty months on 26 September 2004 for a £220 million redevelopment. It was only fitting that The Queen reopened the racecourse on Tuesday 20th June 2006, marking a new era for this most majestic of places.