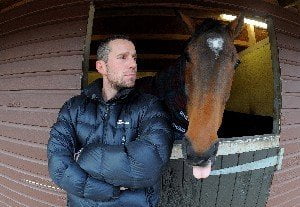 Who are you and where did you come from?

My name’s Teaforthree and I’m a seven-year-old gelding by Oscar out of Ethel’s Bay. I’m trained by Rebecca Curtis, so am lucky enough to be stabled at a beautiful yard in Dyfed, West Wales.

When the weather is cold, I sometimes even get to train on the beach. Now that’s a good start to the day!

What kind of racehorse are you?

I race over hurdles at the minute, but Becky says that I’m going to make a good Chaser soon and my owners keep asking me if I’m going to run in the National, so maybe there’s hope for the future! Racing over 3m is my ideal distance, but I haven’t performed badly in slightly shorter races either.

How much racing have you done and what’s been your best race so far?

I’ve run seven races under rules and although I’ve won at Ffos Las before, my personal favourite was probably my first for my owners at Soccer AM. I came third in the Grade 2 Albert Bartlett Novices’ Hurdle and won a good wedge for Soccer AM’s charity BLESMA. It was just exciting coming out in my Soccer AM rug and having McCoy on board in their colours too. I loved The Festival too – it was brilliant to have a race there and on the same day as the Gold Cup. You should have seen Long Run’s face when he came back from beating Kauto Star and Denman in that one!

Who is your owner – do you ever see them, do they bring you treats?

Racing for Change organised for Soccer AM, a comedic football show on Sky 1 and Sky Sports 2, to own me for the season, so that’s been a right laugh. Just after they became my new owners, Max Rushden, one of the show’s presenters, came out to meet me in Wales, along with Trev, one of the Producers. Max had a go at mucking me out and feeding me, which was interesting, but I got my own back when he asked to ride me – we had our own little race along the beach, although he didn’t know I was going to take him for a proper ride… Helen Chamberlain, the show’s other presenter, and Max also came to watch me race at the Cheltenham Festival and gave me plenty of treats to try and butter me up for the race. BabyElvis from the show has been to see me as well. To be honest, I’m pretty pampered!

What is the ownership arrangement?

They’ve been lucky enough to lease me for the season, so they’ve got all the thrills of being owners for a specific period of time – in this case from December until the end of the Jumps season, which is also the end of the footie season when the show finishes. There’s loads of information at http://www.lovetheraces.com/new-to-racing/get-into-racehorse-ownership/ for anyone else who might be interested in owning a racehorse though, and you don’t necessarily need a footballer’s salary (or a Presenter’s either!).

Becky is brilliant. I’ve heard on the grapevine that she’s one of the most promising trainers in Jump Racing and one of few female trainers in the industry. She’s in her third season of training and has jockeys such as AP McCoy and Aidan Coleman riding for her, so that’s pretty impressive. JP McManus, a top racehorse owner, also has some of his horses with her, so that’s a pretty big nod to her talents!

It’s a bit of a combination, so during the week I do quite a bit of hill work and a couple of days on the circle gallop, which is flat rather than hilly. Once a week I do some fast work and have a sprint, which really gets me pumped and ready to race. I get Sundays off every week though, so I do get some time to relax!

I eat Spillers Fibre Cubes mainly, so I don’t have the most adventurous of palates I’m afraid. Having said that, lush green grass gets my vote every time! I get to go out in the field daily, so I definitely make sure I eat my share of the Welsh countryside!

Who’s your stable lad/lass and jockey?

Becky’s yard is quite small, with about 30 horses, so we don’t have only one lad or lass that is responsible for us – they all muck in. I’m good pals with Alan Latter, who is one of the Lads here, and I know that he enjoys riding me out. McCoy’s been riding me in most of my races lately, but at the Cheltenham Festival, he jumped ship and took a ride on Mossley in the same race – the horse that beat me on my first race in my Soccer AM colours!! Aidan Coleman rode me instead, and he did a really great job – Helen Chamberlain even gave him a kiss after the race, lucky man…

What races are you looking forward to taking part in this year?

I probably won’t race again this season and next season, it will be onto the fences! I think I’ll make a pretty good Novice Chaser – everyone who rides me keeps telling me so anyway!

Wearing Soccer AM’s colours is all the luck I need…

Where can we expect to see you next (probably)?

My next race might not be until next season now – I’d been hoping for one more run this season, but the ground’s got a bit hard for my liking. But I’ll be making a big reappearance next year, hopefully in my Soccer AM colours still. In the meantime though, tune into Soccer AM on Saturday mornings at 10am on either Sky 1 or Sky Sports 2. You might even see me make a guest appearance before the season is out…