The Neptune Investment Management Novices' Hurdle saw Nigel Twiston-Davies and his son, Sam, with their mount, THE NEW ONE, deny victory to favourite, PONT ALEXANDRE despite all the efforts of Ruby Walsh.

The five-year-old gelding (pictured here just before leaving for Cheltenham) sprinted home with a decisive four-length success and made this his third win from four starts this season.

Sam Twiston-Davies commented: "This is him in his full glory. He jumped brilliant and travelled away great. You won't get a much better feeling than that. It was absolute class. I had a bit of trouble in running coming down the hill. I'd like to think he'd be really, really good. This race looked very competitive and considering we got a few knocks down the hill he has really picked up."

Out of breath from cheering her horse home, Sarah Such, joint-owner of THE NEW ONE, said afterwards: "Amazing. I can't breathe, he is absolutely wonderful, a really special horse."

She also explained how her horse got his name: "When he came up the gallops Nigel would say, 'There's the new one with no name' and it stuck." 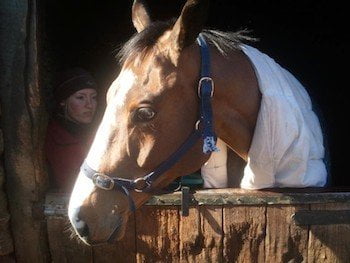 'Sydney' as he is called at home, wearing a visor for the first time, was given a very patient ride by Ryan Hatch as SUPER DUTY and BECAUSEICOULDNTSEE fought it out for leadership.

Eventually the latter weakened, leaving the only threat from ROMANESCO, ridden by Nina Carberry who, try as she might, just couldn't coax any more out of her eight-year-old and it was left to SAME DIFFERENCE to do the business in style.

Amateur rider, Ryan Hatch commented: "I can't really put it into words – it's just unreal. He travelled okay, but I was always just slapping him, trying to get him to get hold of the bridle a bit more. He was in mid-division getting banged around and he didn't really like it.

"But on the second circuit, he started to see a bit more light and he grabbed hold of the bit. He's a superstar and he's given me an amazing ride. I didn't think I'd won. I didn't dare think I had won. But boy when they said 'number 13', I was fair relieved. I was over the moon.”

Everyone welcome to join our fun club.

Come along and find out more about our friendly club.

Be part of the action!

JOIN US on the racecourse or at the gallops: kayfaramisracing.com

Keep up to date with daily Kayf Aramis Racing News