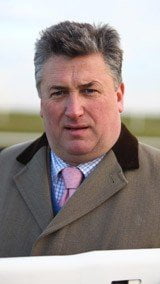 The Vote A P Gold Cup was introduced at Cheltenham in December, 1963, three years after the successful Mackeson Gold Cup (now the Paddy Power Gold Cup) which is held the previous month.

Originally under the sponsorship of Massey Ferguson, the very valuable and prestigious handicap chase had a number of sponsors before settling with the title, the Tripleprint Gold Cup, in 1992.

In 2005, it was called the Robin Cook Memorial Gold Cup in remembrance of the former Foreign Secretary and great racing enthusiast, who passed away in August of the same year. Irish bookmakers Boylesports sponsored the race between 2006 and 2009, although the 2008 renewal was abandoned due to waterlogging.

The Irish took the first three runnings of the race, thanks to the efforts of Limeking, Flying Wild and Flyingbolt.

The Tom Dreaper-trained Flyingbolt was an exceptional horse. After winning the 1965 Vote A P Gold Cup by 15 lengths under top-weight of 12st 6lb, he went on to The Festival, where he captured the 1966 two-mile Champion Chase and followed up by running third to Salmon Spray in the Champion Hurdle the next day.

Flyingbolt took the Irish Grand National the following month under the huge burden of 12st 7lb to earn comparisons to his illustrious stablemate, Arkle. Illness and injury thereafter prevented the chestnut gelding from realising his full potential.

Bob Turnell had two successes as a trainer, the first with The Laird in 1966, ridden by Jeff King. The Laird went on to be second in the 1968 totesport Cheltenham Gold Cup. His second winner, Arctic Bow, was partnered by his son Andy Turnell and they easily beat Soloning by six lengths for owner Jim Joel.

Fulke Walwyn, one of the greatest-ever jump trainers, captured the 1968 running with Tassilo, while the admirable Titus Oates, trained by Gordon Richards and ridden by Ron Barry, defied 11st 13lb in 1969. Richards also trained two other winners, Clever Folly (1989) and Addington Boy (1996).

Leap Frog, trained by Tom Dreaper, was another Irish winner in 1971 off 12st 1lb, after earlier in that year running second to L’Escargot in the totesport Cheltenham Gold Cup.

Fred Winter gained the first of his three Vote A P Gold Cup wins as a trainer courtesy of the great Pendil in 1973. His other training successes were with Observe in 1982 and Fifty Dollars More the following season.

Pendil won back-to-back King George VI Chases at Kempton Park in 1972 and 1973, and was just caught by The Dikler in the 1973 totesport Cheltenham Gold Cup. He is the only winner of the Vote A P Gold Cup to have also won the other feature race at the meeting, the StanJames.com International, which he did in 1970.

David Nicholson was responsible for sending out Another Coral to victory in the 1992 Vote A P Gold Cup. The nine-year-old received a marvellous ride from Richard Dunwoody to get the better of Second Schedual by five lengths.

Norman Williamson was in the plate on Irish challenger Go Roger Go, who triumphed in a great finish in 2000, while the Irish enjoyed further success in the 2005 race when the Noel Meade-trained Sir Oj came with a storming late run to land the spoils.

Mick Fitzgerald partnered the Nicky Henderson-trained Iris Royal to a head success over Risk Accessor in 2003 and the same partnership was successful in 2002 with Fondmort, who beat Foly Pleasant by six lengths.

Fondmort became the seventh horse to win both the Paddy Power Gold Cup and the Vote A P Gold Cup, albeit in different seasons, when he was given another magnificent ride by Fitzgerald to land the first-named contest in 2003 by eight lengths from Poliantas.

Richard Johnson captured his second Vote A P Gold Cup in 2004 when Monkerhostin capitalised on Our Vic’s last fence fall to stride home seven lengths clear of Thisthatandtother to give trainer Philip Hobbs an initial success in the race. Johnson’s previous Vote A P Gold Cup triumph came aboard Legal Right for trainer Jonjo O’Neill in 1999.

The latest Irish-trained winner was Sir Oj in 2005, who came with a tremendous late run to prevail by a length from Le Passing for trainer Noel Meade and jockey Paul Carberry.

Exotic Dancer in 2006 captured both the Paddy Power Gold Cup and the Vote A P Gold Cup, becoming the eighth horse to complete the double. The Jonjo O’Neill-trained gelding demonstrated tremendous improvement throughout the season, taking the Grade Two Letheby & Christopher Chase at Cheltenham in January and then finding only Kauto Star too strong in the totesport Gold Cup at The Festival before winning a Grade Two chase at Aintree.

Pegwell Bay (1988), Senor El Betrutti (1997) and Exotic Dancer (2006) are the three horses to have captured the Paddy Power Gold Cup and Vote A P Gold Cup in the same season.

The biggest shock in the history of the Vote A P Gold Cup came in 2007 when Tamarinbleu put up a superb front-running performance to record a 22/1 success. Trained by David Pipe and ridden by Denis O’Regan, the gelding’s victory was certainly no fluke as he went on to win a Grade One chase at Ascot and was also placed in Grade One contests at Haydock and Aintree.

BACK TO:  GUIDE TO THE INTERNATIONAL AT CHELTENHAM